Last year I had the privilege to be in the place where all of this happened. It’s in Jerusalem, in the Old City. The Old City is not as old as the city described in the New Testament, which can be confusing to tourists. That city, in the gospels for instance was smaller even that the small Old City of Jerusalem is now. The current Old City is less than a half square mile in area, though it feels a great deal larger when you are in it. 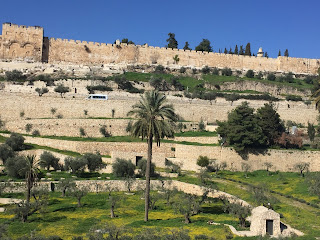 Jesus was arrested in the Garden of Gethsemane which is a walk of, I’d say, less than a half hour to the temple where the high priest Caiaphas would have been. Then another short walk to the south eastern part of the city that housed the headquarters of Pilate. Finally, it is a short walk to Golgotha where Jesus was executed by crucifixion and his tomb is not more than 200 feet from there. All told I suppose one could walk from the top of the Mount of Olives, through the Garden of Gethsemane, to the Temple, to the Roman Headquarters, and then on to the cross and tomb in a half day. I suppose lots of tourists do that every day, I know I have.
The Church that has been built on the location of Jesus’ death, burial, and resurrection is called the church of the Holy Sepulchre. 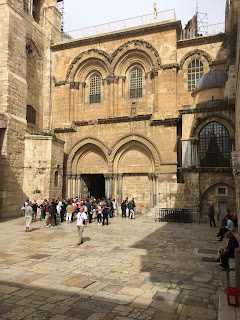 Soon after Jesus’ ascension Christians began to meet at the tomb and at Golgotha to pray and share the meal. This became a nuisance to the Empire so they filled in the old expired quarry that had been turned into a Jewish cemetery and where they used to crucify people, they filled it in and, to add insult to injury, erected a Temple to Venus. Years later Emperor Constantine’s mother Helena, using an ancient travelogue as a guide, excavated the old site of the tomb and place of crucifixion, and established the Church of the Holy Sepulchre in the fourth century.
The Temple is no longer there of course, destroyed in 70 AD by the Roman Empire, all that remains is the western retaining wall that holds up the small mount that used to hold the Temple. 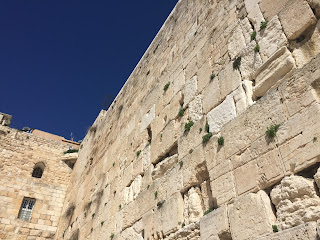 The headquarters of the Empire are, of course, perfectly preserved. 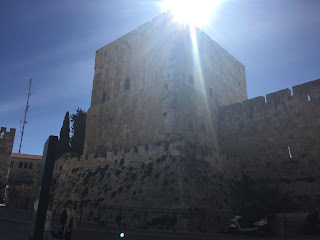 My point I suppose on all this is to try to drive home the reality of all this. All of this happened: the crucifixion of Jesus, his death, his burial, his arrest. It is all too real, and, as we focus more on the fact of all this, I am struck by a particular aspect of the story that might be the most real. It’s not about Jesus, or Pilate, or even Peter, it’s about another disciple who is not even named in this scene.
If you look at what this disciple is doing in this story today, a great deal is revealed. First we see that after the arrest of Jesus this unnamed disciple is known to the High Priest. Being known to the High Priest means that the disciple is able to invite Peter in. Being known to the High Priest, this disciple is able to walk in the areas of power, indeed he is able to share his privilege and include others. This disciple has one foot in the cultural and societal power structures of the world and one foot in the radically dangerous, loving Kingdom of God in Jesus.
Now, once this disciple has secured Peter’s entry into the courtyard of the Temple we have Peter’s famous denials of Jesus. Much has been made of these denials, and rightly so: all of us have denied Jesus at one time or another, probably most of us do so on a regular basis. But what we don’t have in this scene is the denial of that unnamed disciple of Jesus. This unnamed disciple is not asked about Jesus, he is not interrogated.
While some of us are Peter and we deny Jesus, all of us are really this unnamed disciple walking in two worlds, one in discipleship to Jesus but also wielding significant cultural power of one kind or another. Furthermore we are this unnamed disciple because we have the privilege of not being interrogated about our allegiance to Jesus. That disciple could have spoken up and said, “I am one of his disciples,” but he didn’t. He simply let Peter get questioned. If I know people, then I would wager that this unnamed disciple even was aghast and indignant at Peter’s denials of Jesus. Yet that unnamed disciple was never questioned and thus stayed safe with an intact integrity knowing that he was pure and good and on the right side of history.
We are this unnamed disciple. We are walking in two worlds, one of power and privilege and one of knowing the expansive, boundary breaking world of Jesus. But it is not simply that we are bi-cultural. The fact of our privilege in the world allows us to be quiet in our discipleship, to avoid interrogation and, when it serves our purposes to silently deny Jesus.


As we stand here at the cross it is time to give that unnamed disciple a name be it Josh, Russ, Budd, Mary, …. That disciple needs a name. Claim your name and identity as a disciple of Jesus. Do not remain silent for when the powerful are silent then they are complicit in the injustices of the world. Come out of the shadows and boldly distinguish yourself as a disciple of the one who was obedient to God even unto death on a cross.
Posted by Unknown at 3:48 AM

And for some reason reminds me of this.