My daughter the theologian Quotes from this morning:
"God will keep us." What do you mean? "God loves us in our bodies." Not bad for a three year old, not bad for anybody! Good incarnational theology.
Posted by Unknown at 8:35 AM 1 comment: 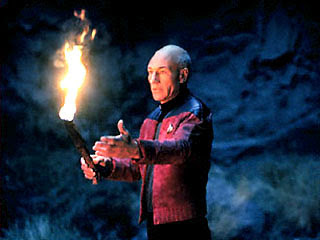 I'm watching the best Star Trek: the next generation episode ever. It's called Darmok, and it's about Captain Picard trying to communicate with an alien captain named Dathon. It takes the whole episode, and a bunch of useless action, to tell the story of a race of people whose language is based solely on their myths and legends. Picard has such a hard time because he has no frame of reference for the language, consider: Darmok and Jilad at Tanagra; Kiazi's children, their faces wet; Shaka when the walls fell, and Mirab his sails unfurled. 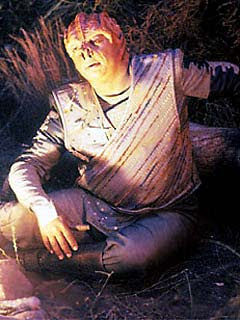 Eventually, Picard realizes the basis for the language, and the two begin to share their respective stories (Picard tells the story of Gilgamesh)and gain insight and communication.

When looking at the Bible it is vital that we consider two things: First, what did the text mean to the people at the time, and second what is the text saying to us now in our context? This is the only way a text can truly be sacred, if it can be interpreted. If we see the scriptures as literal truth then there can be no interpretation, there can be no us. I once heard a sermon where the priest remarked that a literal interpretation of the Bible was like eating a banana without peeling it first. I would add that you can do that but it is not enjoyable of necessarily nutritious. It is daoubt and questions which allow us to penetrate the strange Darmok-like world of the Bible.

For me it's the old saying: I take the Bible seriously, but not literally. The Bible is a much richer book when seen deeply, like poetry. Yes, metaphor, analogy, and other full ranges of figurative language. All this and so much more, us. It is through our engagement, our living into the scriptures, that they can be holy.

We just spent the day packing, cleaning, and painting with my parents. H-baby was a little feverish so he was home with us. A-fire was with BSB's parents. We just received our financial aid award from Sewanee, exceedingly generous. And my home parish is having a going away party for us and they have formed a growing seminarian fund for us.

What's all this stream of consciousness for? The point is that BSB and I are at the center of a support storm. It feels good to have so many people rooting for us.

A few weeks ago the Bishop of Atlanta had a dinner for the new seminarians. I never really thought of it, but one of the jobs of most of his staff is to take care of us seminarians and our families. Another theme that arose from the dinner that night was perspective. The Bishop and others continually talked to us about why we are going to seminary: bible, theology,and prayer. The rest is gravy and good, but don't lose sight of why we are there. Also, the long view was given to us: the job market in the coming years, challenges and opportunities in the priesthood etc.
How wonderful to start an adventure with support, perspective and eyes fully open.
Posted by Unknown at 9:26 PM 1 comment: