Horror. Good God what is it good for? Absolutely nothing! Wait just a minute! Is is good for anything? I'm talking about horror as a genre, horror movies in particular. When I was growing up the name of the game was Nightmare on Elm Street, Friday the 13th, Halloween, and Chopping Mall. I watched some of those movies through my hands, but they were basically ways to be grossed out. 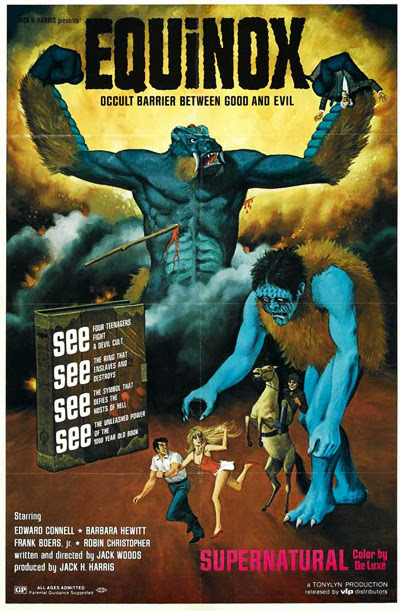 Once I started having kids (and by "I" I mean my wife, of course) I was completely turned off by all horror and even a hint of violence. Having a child, for me, it seems, had made me sensitive to the delicacy of the human body and any assault on that precious gift. Still to this day though I don't watch movies or television that features routine violence, especially torture.

One movie I watched recently was Equinox.  What caught my eye is that it is part of the Criterion Collection

I love the Criterion collection it is a wonderful collection of world cinema that are influential and important for various reasons. You can learn more about this important collection here and here, a great many of these films are available on Hulu. There are a few horror films on there, my favorites are Chronos and early del Toro movie and House, a delightfully wacky Japanese horror, I'll likely write about after I seen it a few more times.

My interest in horror is two fold, bodily and religiously. Body: it seems to me that the horror in horror is the treatment of bodies. We are repulsed because we see a body being treated in a way that we know is wrong and inappropriate. Even those who take squirming delight in horror are reacting in a way that they know, "this is  not how a body is to be respected." The body in horror is the avenue of the story. My concern though is that an over-abundance of exposure to these types of scenarios where the body is disrespected and, just as bad, dis-jointed from the integrity of a loved, storied personality, an integrated person (body-soul-mind), then bodies become just another thing to use as a commodity. That's the real horror of horror, bodies being used as an end. And that is, I don't know, the ministry of horror: Bodies are not things like other things, bodies are people. And, as Terry Pratchett reminds us, "sin is when you treat people as things." The sin of this posture towards bodies is what horror highlights, by doing that very thing.

Now, changing gears: horror is usually gothic in nature. Not this kind of gothic.

I'm sure that some academics have carefully defined gothic over the years, but what I mean is that religious symbols seem to have an objective power. In almost all horror movies that deal with demons, magic, and old old monsters; the cross is able to keep the big bad at bay. I think that this gothic aspect to horror comes from the Middle Ages when the European world was awash in the blessing power of sacraments and relics. There are many tales that we have of the power of the Eucharistic elements, of witches stealing a host from a church to use it in their Black Masses only to combust and the host makes its way back to the church. These are called host tales, where the sacramental element has objective power over evil. This world-view could be seen in the ocular communion of the church in the middle ages, where simply gazing upon the sacrament would bestow benefits upon the faithful.

Even in horror there is an expectation that the human body is deserving of integrity and respect and that God, even in the midst of all the blood and guts, is real and is incompatible and intolerant of evil.

Equinox is an interesting movie that holds to all of the above. It's from 1967 and not much of a story at all. Indeed, I almost turned it off a couple of times but then the special effects would kick in . These were primitive, but charming. I noticed that the stop motion animation sequences were unusually long and affecting. There were alot of scenes that were reminiscent of Evil Dead, Equinox is clearly an influence.

Once the movie was over I looked it up, especially the name that I had heard before: Dennis Muren. Oh that Dennis Muren.

One of the main SFX people behind Star Wars. That Dennis Muren. A real ground-breaker. What  Equinox, this cheesy, short, story-thin, yet visually arresting little horror film was, was a 20 year-old Muren's summer project. They made the movie with $6,500.

All of a sudden this movie had a story behind it and I could see its merits. Which makes me wonder: what is the value of a piece of art, divorced from its story? This movie got a lot better because of what it means in the history of special effects prior to, with Harryhausen,

and what would follow with Star Wars and more. So then, should art be judged without appeal to its history or should be keep in mind what it took for this piece to be made? Perhaps it's something like the body being divorced from its integrity, horror follows. That's overstating it of course. But everything has a story that adds to the depth of the art or of the body; and it just get better the more we know and the more we include that in our understanding of the art. Or the body.
Posted by Unknown at 10:28 PM No comments:

Posted by Unknown at 1:44 PM No comments: