Do the Hoaxy Pokey

At church this morning the priest centered part of her sermon on the Prayer of St. Francis. It is found in the book of common prayer and on cross-stitch and calligraphied framed art everywhere. The BCP rightly calls the prayer "A Prayer Attributed to Saint Francis." Why "attributed"? Because Frank didn't write it, and the prayer itself can be traced back to 1912, not the 13th century.

This brings up the issue of legend and reality, and how the border between the two is so easily blurred.

When I was growing up, I went to a missionary Baptist church and I was very involved in the youth group. One day, one of my teachers put a copy of the Arkho Volume in my hands. For those who don't know it, read a brief introduction to the Arckho Volume here. The Archko Volume is essentially a (fake) account of interviews with the members of the Sanhedrin who convicted Jesus and even an interview with a shepherd who saw Jesus' star! It is an utter fabrication, an amatuerish one at that, and I believed it without question as a young adolescent. The book was originally written, in my opinion, to convince skeptics to become Christians without the burden of having faith.

I could write for hours here about the importance of demythologizing our culture-religion and starting again with a trusting relationship with God, one with pitfalls and uncertainty. But for know I think I will simply say that the truth of the church is always stranger than fiction, and more importantly, God and the Holy Scriptures can and should stand up to our most rigorous examination. Thanks be to God!
Posted by Unknown at 12:12 AM No comments:

My 4.5 y.o. daughter has recently become interested in High School Musical. Saying "interested" is something of a understatement. For the longest time, about 30 years, I hated musicals of any kind,The Sound of Music, Mary Poppins (which has deep theological import, see here), if it had Rogers and Hart, or Hammerstein, or even Sondheim in it I wouldn't give it a chance. That was before the Buffy: the Vampire Slayer episode, "Once More With Feeling."

This episode showed me the importance of song for the expression of what can't be simply said. Now, I'm kind of a fan of musicals, I still don't care for the Sound of Music; but I'm open to the idea, I really liked Moulin Rouge, and Dr. Horrible's Sing-Along blog.

Musicals communicate a depth of feeling that words sometimes can't, music itself, its rhythms and harmonies (not to mention the cumulative associations we all bring to how music makes us feel, which coincidently, there are real biological reasons why minor key songs are wrenching for us emotionally. It has to do with overtones that harmonize nicely, and minor keys clash with that, causing cognitive dissonance) amplify the message.

What strikes me as funny, but also poignant, about musicals is that the characters simply break into song, then go about their lives as if the song was just the thing to do.

We do this in the church too, especially when we chant. We break into song. "Come let us sing to the Lord; let us shout for joy to the Rock of our salvation." Singing that carries more meaning, and involves more of my physical body, than simply saying the words.

Singing, in chant, hymns, and South Pacific, all mean one thing: These words need more, these words say what I mean, but they need my complete abandon, my emotional nakedness!

Breaking into song, there is something very true in that phrase. We break from the standard politeness of regualr speech and communication, into something more vulerable and concentrated.
Posted by Unknown at 8:39 AM No comments:

Here's a little movie about this past weekend's mobile food pantry. I was very excited to volunteer there, but was a little disappointed to see only three other seminarians there.

My feelings on the event ranged along the spectrum with my physical energy. We worked from 9-4, and were able to distribute food to 450 people (250 more than anticipated).

Posted by Unknown at 8:29 AM No comments: 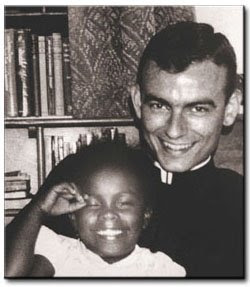 Here is my sermon from Friday, my first preached at Sewanee.

In biblical studies, we learn of the importance of context. What is the historical setting of the text? What are its cultural assumptions? What is the inter- and intra-textual organization of the entire work? Why did the writer put pen to paper in the first place? How did the original audience hear the text?
As we learn about scripture, or any communication for that matter, we learn that some messages are high context: messages that need unpacking. For example, the Old Testament is high context. It needs careful study and comparison and it helps a great deal if you can read biblical Hebrew: High context.
A smiley-face, by contrast is low context. No real explanation or special language required.

Last year’s Pulitzer Prize winning novel “The Brief, Wondrous Life of Oscar Wao,” by Junot Diaz is high context. If the reader is not highly conversant with the world of Tolkien’s Middle Earth, Doctor Who, Dungeons and Dragons, and Marvel Comics, much of the depth of that beautiful story is simply lost by the non-nerdy reader. High Context.

The Real House Wives of New Jersey is low context. Anyone watching that show quickly sees the meaning of it: That these people are horrible. Low Context.

Why was it written, what did it mean? What is the context?

But there is another context.Not just the context of the words spoken, but that of the words received. There is this context [book].There is our context [us]. And there is my context and yours, as individuals. Indeed, each individual is a veritable constellation of contexts, shaped by time, situation, genetics, and nutrition to name but a few. Did you ever wonder why it is that we are hear the same words and some are brought to tears, while others are brought to sleep? It’s our contexts.

One night, in 1965, many seminarians at the Episcopal Theological School, now the Episcopal Divinity School, went to evening prayer. Jonathan Daniels, one of many, followed the liturgy and chanted the Magnificat with everyone else. “My soul magnifies the Lord and my spirit rejoices in God my savior.”

Jonathan Daniels likely could have used his newly acquired Greek to parse out each declension of each word of Mary’s song. Or perhaps he, or one of his classmates, while chanting the words “Surely, from now on all generations will call me blessed,” may have speculated on the historicity of the Magnificat. Even more likely, Jonathan Daniels and his classmates simply went to evening prayer. Perhaps they went out of piety, or a sense of duty, or perhaps coercion by the faculty. Or maybe, some of them harbored that old George Herbert inspired pastoral fantasy. Whatever the case, most of the students there at evening prayer just went; they went and said the words. No care or concern for the context, either their own or for the words they sang.

Just saying the words. This is a great hazard of life in the church, and it can hardly be overstated, but of course when we overstated something, it is no longer heard, which is the problem. For us in the church, we say history’s most astounding things…everyday. For example, today’s Epistle:Galatians 3:27for all of you who were baptized into Christ have clothed yourselves with Christ. 28There is neither Jew nor Greek, slave nor free, male nor female, for you are all one in Christ Jesus.

But that night in 1965 at evening prayer as Jonathan Daniels heard the Magnificat, he heard its words. And those words entered a context, the subversive, apocalyptic, loving context of Christ at work in Jonathan Daniels that had only one response: Yes.
The context of Jonathan Daniels that night was subversive in Christ; subversive because Mary’s words described God’s reign, God’s way of doing business, bringing down the powerful and lifting up the lowly. Mary was talking about Selma, Alabama. Right there in evening prayer, Jonathan Daniels stood at the nexus of apartheid in Selma, and, it must be noted, the segregated Episcopal Church there; and God’s subversive upending of all that seems to be. Daniels said, “Yes,” and was resisted by sheriffs, mobs, priests, bishops, and ultimately a shotgun blast. Daniels was an “outside agitator” because he believed and acted as the subversive God, heralded into this world, this context, by the song of a virgin. God made man, to make good on God’s own promises.

The context of Jonathan Daniels that night at evening prayer, in 1965 when he sang the Magnificat, was apocalyptic. Apocalyptic is not a word we use to describe the Christian life very often, but you had better believe that apocalyptic is an exact definition of what we do up there at that table [point to altar].

Eugene Peterson writes:
In its dictionary meaning, apocalypse is simply “revelation,” the uncovering of what was covered up so that we can see what is there. But the context in which the word arrives adds color to the black-and-white dictionary meaning, colors bright and dark—crimson urgency and purple crisis. Under the crisis of persecution and under the urgency of an imminent end, reality is revealed suddenly for what it is. We had supposed our lives to be so utterly ordinary. Sin-habits dull our free faith into stodgy moralism and respectable boredom; then the crisis rips the veneer of cliché off everyday routines and reveals the side-by-side splendors and terrors of heaven and hell. Apocalypse is arson—it secretly sets a fire in the imagination that boils the fat out of an obese culture-religion and renders a clear gospel love, a pure gospel hope, a purged gospel faith.” (The Contemplative Pastor, Eugene Peterson)